Too Much Xmas Cheer?? 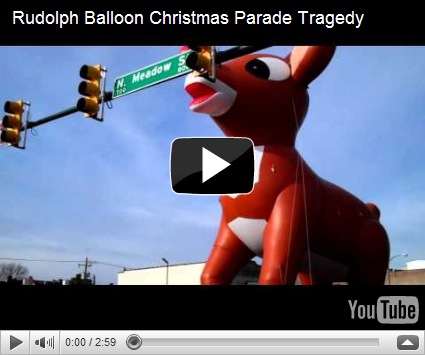 The annual parade in Richmond, Virginia started off well, with hundreds of spectators watching the giant reindeer on parade.

But Christmas joy turned to horror as it became clear Rudolph, flanked by Segway riders wearing antlers and guided by volunteers using ropes, was on a collision course with a set of traffic lights.

The crowd frantically tried in vain to attract the attention of Rudolph’s handlers, screaming at them to stop before the poor reindeer met an untimely end.

But, alas, it was too late.

But as the handlers attempted to steer him to safety, the reindeer’s head was impaled on the traffic lights.

The much-loved Christmas animal – famous for using his red nose to guide Santa’s sleigh – rapidly deflated, to the dismay of young onlookers.

It looks as though Father Christmas might need someone else to light his way this Christmas Eve.