Driver crashes twice AFTER being pulled over 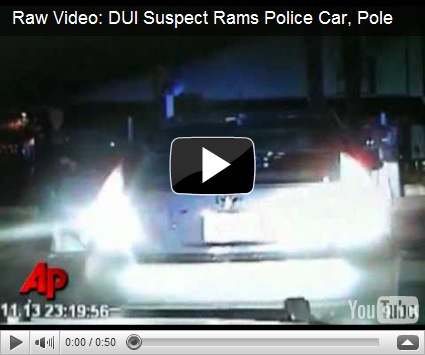 A suspected drink driver in the US has somehow managed to crash his car twice… AFTER being pulled over by police.

When police in Laguna Beach instructed a suspected drink driver to pull over he duly did as he was told and pulled into a petrol station car park.

But as footage from a camera mounted in the police car shows, that's where it all began to go wrong for Christian Aparicio.

As he exited the car to talk to approaching officers, Aparicio left the vehicle in reverse and it sped back, smashing into the police patrol car.

Seeing what was happening, he then jumped back in and hit the accelerator -- this time sending the car shooting forward and crashing into a pole. It's safe to say he's had better days.