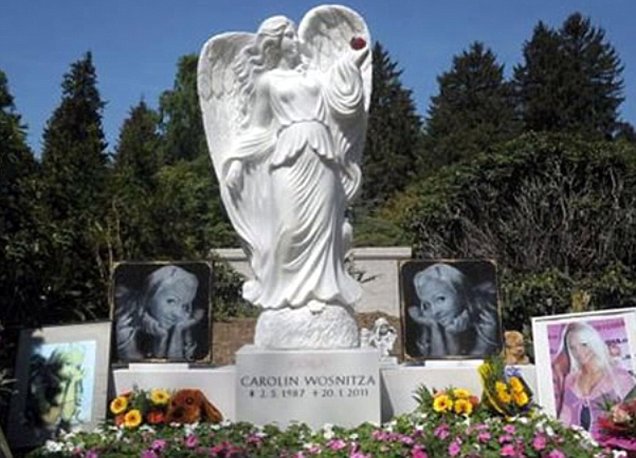 The 23-year-old deceased star of German Big Brother - whose real name is Carolin Wosnitza - was buried in Hamburg's Ohlsdorf Cemetery following her untimely death in January when she slipped into a coma after complications during a breast op.
Her angel-shaped £15,000 gravestone is no ordinary fare, with flowers and photos - including one or two of the more raunchy variety - adorning her last resting place, along with the distinctive statue.
However, it has upset cemetery officials who claim it 'breaches guidelines' and must be removed immediately.
Ms Cora's husband, Tim Wosnitza, is set against it though, and has even gone to the extreme of getting hired help to stand guard in order to make sure the mini shrine is not removed on the quiet during the night.
'She was a beautiful woman. Who can take offence?' Mr Wosnitza said.
'I have employed security guards so they don't come in the middle of the night.'
Officials continue to argue that the grave's markings are inappropriate and could be deemed offensive by other mourners visiting the cemetery, which is one of the largest in the world.
Posted by A Whinger in France