A Bed For The Night? Baffled shoppers in Lanzhou, northern China, couldn't work out where a snoring noise was coming from until they looked up. 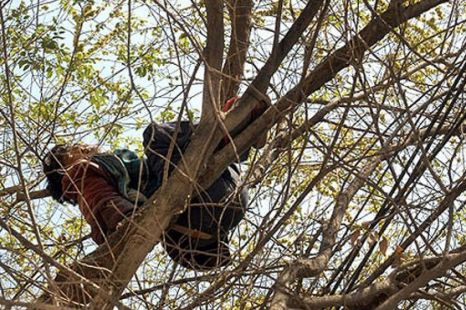 And there - 20ft above them - was a woman curled up and fast asleep perched on a narrow tree branch.

One shopper said: 'We wouldn't have known where it was coming from except one of her shoes fell off and hit someone on the head.'

Police eventually persuaded her to come down to earth with sandwiches and a bottle of water.

But it seems police in southern China are less patient with people perched in high up places.

In Hechi shocked shoppers got a right jolt of eye voltage when a naked protester clambered up an electricity pylon to complain about a police crackdown on beggars.

After hours of negotiations, fed up cops shot him with a wildlife tranquilliser gun and caught his body in a sling before lowering him to the ground.