Morris dancers 'banned from pub over bells on shoes'

A group of Morris dancers claim they were banned from a pub because of the bells on their shoes.

Slubbing Billys dance troupe were given their marching orders from the Swan and Three Cygnets pub in Durham, County Durham, which has a ban on any form of music. 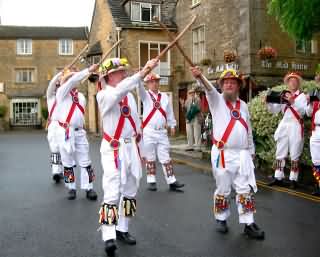 The dance group had spent the weekend in the city, performing in Durham's Market place.
But they ran into trouble when they popped into the pub for a pint - because some of the members had bells attached to their feet.
Slubbing Billys member Duggs Carre, said: "We couldn't believe it when we were told in the strongest possible terms to leave.
"A woman member of staff hollered 'no bells' at us.
"One of our group, wearing his morris dance gear, went in first and was served a pint of beer without question.
"But when two of our lady members followed wearing bells they were told to get out out.
"There were about 15 of us and we all went around the corner to the Half Moon instead.
"We had been dancing in the Market Square on Saturday afternoon and were thirsty, we were looking forward to a refreshing pint."
Band member Jill Morris added: "We have danced in a number of countries, Belgium, Holland and France, as well as all over the UK and never encountered anything like this before.
"We weren't attempting to perform in the pub, simply enjoy a quiet drink.
"But apparently bells on our toes means we will not have music wherever we go, at least not in the Swan and Three Cygnets."
The pub is owned by the Samuel Smith brewery which has a strict no music policy.
Since the policy was introduced seven years ago a popular folk club had to move out of another Samuel Smith's Durham pub - the Colpitts.
But Mr Carre, a council officer, added: "To ban us simply because some of us were wearing bells on their clogs is simply too absurd to be true.
"There is a difference of opinion within the morris dancing fraternity as to whether wearing bells on clogs is appropriate, but we didn't expect it to lead us to a ban.
"We spent the weekend in Durham and had an enjoyable time performing in the city centre.
"But the attitude in the Swan and Three Cygnets left a bitter taste in our mouths.
"We have been to other Sam Smith pubs in Beverley and Whitby without trouble before. After all, it is a Yorkshire brewery and we are a Yorkshire dance group."
The manager of the pub said yesterday he was not allowed to comment on the matter.
Posted by A Whinger in France